Zara does not have sufficient oversight of its supply chain. New findings of the Brazilian labour inspection, released by Repo?rter Brasil today, describe numerous labour rights violations in the company’s supply chain. A research report by SOMO and Repo?rter Brasil also released today reaches the same conclusion. In 2011, Brazilian inspectors found cases of modern-day slavery in Zara’s supply chain. After the scandal, Zara promised improvements by monitoring its supply chain more closely. The new inspection findings and the research report reveal that Zara is not living up to the agreements made with the Brazilian authorities at that time. In addition, the research report exposes Zara’s dodgy legal strategy to avoid liability for Brazilian labour rights abuses. 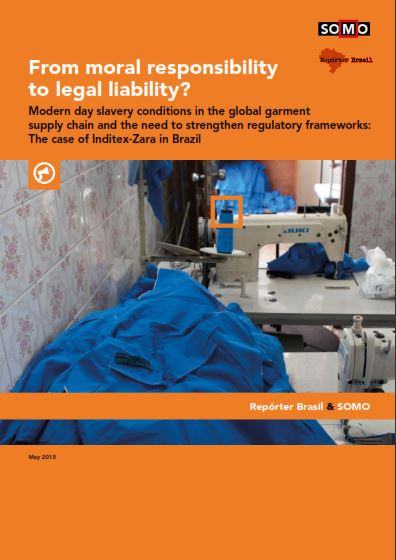 Zara is one of the brands of Inditex, the world’s largest clothing retailer measured in number of stores. The company's popularity stems from its unique ability to deliver the latest catwalk trends to its shops at affordable prices and at record speed. This is achieved not just by managing its own factories, but also by means of a large network of suppliers spread across several countries, who must be able to work fast and flexibly. To meet tight deadlines and to be able to complete unanticipated orders, manufacturers may subcontract certain production processes or even shift complete orders to other factories and workplaces, often without informing the buyer. This way of working has spawned an obscure supply chain which was revealed by Brazilian inspectors in 2011. They discovered that orders from Zara ended up at illegal workshops, where undocumented immigrants from Bolivia and Peru were working and living under inhumane conditions.

Lack of compliance with agreement
These inspections are part of a package of measures that the Brazilian government has rolled out in order to detect and address modern-day slavery. After the inspections, Brazilian authorities reached an agreement with Zara in which the company committed itself to carry out better and more frequent supplier inspections in order to avoid infringements. The report by SOMO and Repo?rter Brasil reveals that Zara is still not monitoring its production chain sufficiently, and that the company is not living up to the reporting requirements specified in the agreement. This is confirmed by the recent report of the Brazilian labour inspection that Repo?rter Brasil had access to. According to this report sixty-seven suppliers were checked, and were found to be engaged in countless labour rights violations, such as excessive overtime and occupational health and safety violations.

Irresponsible legal strategy
To make things worse, Zara is pursuing a legal strategy in Brazil that is potentially very harmful. The 2011 inspections put Zara at risk of entering the so-called 'dirty list' of Brazil's labour and employment ministry - a registry of companies caught employing workers in conditions analogous to slavery. Zara pushed back by filing a law suit claiming that the list was unconstitutional. The company may purposely invalidate a very effective legal instrument with this defence strategy. In recent years, Brazil's unique approach, combining inspections, prosecutions and making public the list of perpetrators, has rescued 45,000 people from situations that could accurately be described as modern-day slavery.

According to SOMO and Repo?rter Brasil, this legal strategy is inconsistent with Zara's corporate social responsibility (CSR) policy. Whereas Inditex promises customers decent conditions under which its products are manufactured, in court, the company argues that it cannot offer any guarantees.

SOMO and Repo?rter Brasil’s report demonstrates that with the current structure of the garment supply chain it is indeed nearly impossible to assure that products are made under decent conditions. However, companies such as Zara, who benefit from the way the supply chain is structured, should not be allowed to dodge their responsibilities. SOMO and Repo?rter Brasil argue that corporations with such strong purchasing power, and that pressure for low prices and tight delivery deadlines, are in fact contributing to human rights abuses. Precisely for this reason they should be held liable for human rights violations in their production chains. Supply chain liability is nothing more than a legal basis to hold companies to account for what fashion companies like Zara say they are already doing: make sure that they are not complicit in human rights violations. The organisations also call on the Brazilian government to strengthen the legal basis of the dirty list so that it can withstand attacks by companies such as Zara.


Download the report ‘From moral responsibility to legal liability?’.
Read more on the findings of Brazil's labour inspection on the website of Repórter Brasil: www.reporterbrasil.org.br

About SOMO
SOMO is an independent, non-profit research and network organisation working on social, ecological and economic issues related to
sustainable development. Since 1973, the organisation investigates multinational corporations and the consequences of their activities for
people and the environment around the world. www.somo.nl

About Repórter Brasil
Repórter Brasil was founded in 2001 by journalists, educators and social scientists. Its mission is to identify and address public
labour and human rights violations in Brazil, as well as other kinds of social and environmental crimes. Because of its work, it has
become one of the most important sources of information about forced labour in the country. Its news, investigations, researches
and educational methodology are used by leaders in the government, companies and also civil society organizations as tools to
advance the protection of human rights. www.reporterbrasil.org.br