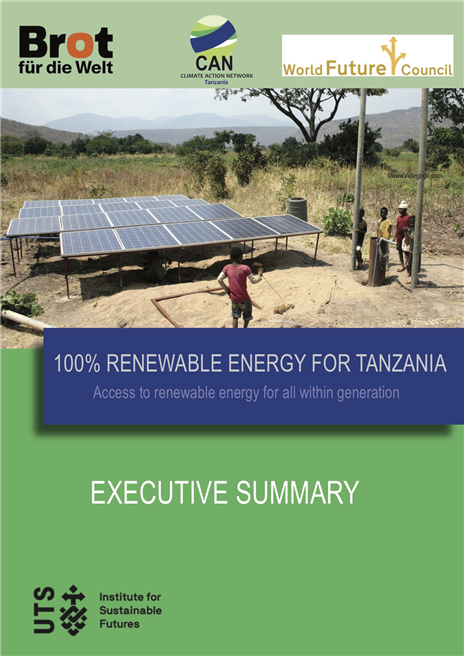 By deploying 100% renewable energy, Tanzania can provide access to reliable energy for all its citizens, while increasing living standards to the level of industrialized countries by 2050. This is the conclusion of a scientific study that is released today in Dar Es Salaam by the Institute for Sustainable Futures (ISF) of the University of Technology Sydney (UTS), Climate Action Network Tanzania (CAN Tanzania), Bread for the World and the World Future Council (WFC). The study also reveals that generating electricity from renewable sources is about 30% cheaper than from fossil resources.
"Reliable energy access for all Tanzanians is a key factor to become a middle income country.” says Sixbert Mwanga, Executive Director of CAN Tanzania. "This study proves that this will become reality by implementing 100% renewable energy, at significantly lower costs than conventional energies.”
Because of the decentralized and modular character of renewable technologies, the power grid can be build up quickly and locally, providing clean and safe jobs.
The study shows that by 2020, Tanzania’s share of renewable electricity production can already be at 53%, and increase to 75% by 2030 with an installed capacity of about 20GW in 2030. In the heating sector, sustainable renewable energy technologies can provide 90% of Tanzania’s total heat demand in 2030 and 100% in 2050. Energy efficiency measures help to reduce the currently growing energy demand for wood fuel for cooking stoves and shifts 100% to modern sustainable biomass, solar and geothermal heating, as well as electric cooking and heating by 2050. Tanzania's transport sector can be decarbonized by 2050 with 75% coming from renewable electricity, despite population increase, GDP growth and higher living standards. By 2050, electricity generation costs in a 100% RE scenario will be 4.5 cents/kWh lower than the reference scenario.
"Investing approximately US$4.5-9 billion per year - depending on whether one includes the transport sector - in a 100% renewable energy economy will guarantee clean and accessible power for all Tanzanians by 2050” says lead author Dr. Sven Teske, Research Director at the UTS Institute for Sustainable Futures. "While our study’s renewable energy pathway scenario requires upfront investment costs of US $3.2 billion more than what is set out in Tanzania’s Power System Masterplan 2016, utilizing free wind and solar resources results in fuel cost savings of US$5.3 billion. 100% renewable energy is the significantly cheaper pathway,” says Dr. Teske.
Finally, the study shows that Tanzania has sufficient renewable energy resources to keep storage shares well below 20% while securing supply of 100% renewable energy for all at all times. It builds on a three-step approach —the Solar-Swarm Grid (3SG) expansion – which means that universal energy access is reached from pico-grid via micro grid to transmission grids. "By taking a 100% renewable energy pathway, Tanzania can eradicate poverty as well as combat climate change – and become a role model for the African continent.” says Dr. Joachim Fünfgelt, Bread for the World.
Background
The study has been compiled as part of a multi-stakeholder process, which CAN Tanzania, Bread for the World and WFC have conducted over the past 18 months. The goal has been to develop a coherent strategy on how to implement 100% RE as part of Tanzania’s Sustainable Low Carbon Development and Poverty Reduction Goals. "This study complements a comprehensive policy roadmap, which various energy stakeholders from Tanzania have developed through interactive workshops and a study tour. They have identified to need for a scientific prove and concrete guidance on how to technically and economically implement 100% RE.” says Anna Leidreiter, World Future Council.
Further information about the project as well as downloads of all documents can be found online:
Project Page | Policy Road Map | Scenario Executive Summary
Contact:
World Future Council
miriam.petersen@worldfuturecouncil.org | www.worldfuturecouncil.org
Quelle: World Future Council. Stimme zukünftiger Generationen
Technik | Cleantech, 17.10.2017